Copperhead in the Chicken Coop 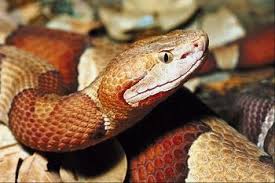 A couple weeks ago my little chickens were big enough to move out to the chicken coop. My parents and husband all helped get it ready. They were still too small to put out in the scratch yard because they could pull a Harry Houdini and slip through the wire. We had to use dog pen wire because it was cheaper and more sturdy than regular chicken wire, but it would work for larger birds when they grew up.

A week had passed and they were all comfy cozy. One day I go out there and one of them had fallen ill without any warning signs. I picked it up and it was unresponsive and paralyzed. It took it out just in case of disease and let it pass in peace.

The next day I go out there to do my routine check up, feeding, watering. Feeding went A-ok. However as I was gathering the water bowls an unexpected visitor decided to drop in through the open door. A 1 and a 1/2 to 2 foot copperhead. He mosied in and when he saw me and began striking erratically. I threw the water bowls at him in hopes to make him leave but he was a stubborn son of a gun and went to the corner where my chickens were huddled together at quick speed and striking. I frantically try to think of something to drive him off so that me or the chickens wouldn’t get tagged.  I was barefoot and I had no “snake-getter” gear or no gun. I stomp my feet to cause “noise” for the snake and kick dirt at him; snakes don’t have ears so they don’t really hear; they sense vibrations. He finally escaped outside the coop by a small hole in the right corner away from me and my babies. I call my husband out for an inspection, but the snake was gone.

We plugged the hole and I checked the coop door and it had a space where the snake could get in so I barricaded it. The mystery was solved how my chicken died–died by lethal injection. The copperhead could see them because of the pits in front of its eye so it could see just like the predator alien in the Predator movie series. The Deep South and the West are filled with pit vipers and copperheads are the most plentiful and can be found everywhere. A human hasn’t died from a copperhead bite in a hundred years, but that doesn’t make it any less not-painful or bad enough to send me to the hospital or any less serious. Trips to the hospital are not fun and long out here . Not taking any chances. Now I go to the pen prepared–just in case. It was a blessing that it was not a rattlesnake instead–that would have made things much worse and one could appear. I’ve now named that copperhead Crazy and now he will enter at his own risk–he and his buzzing neighbors.

The Many Uses of Fishing Line

Fishing line is just one of the things that have more uses than its original purposes just like duct tape  and WD-40. If anyone has ever worked with it and tried to break it after hanging up a lure in the water can learn how strong it is, but it is so flexible. My reading glasses became a little discombobulated as a result of my dog's helicopter ...