The Many Uses of Fishing Line 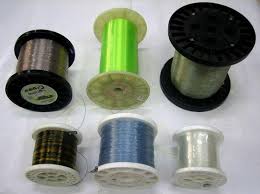 Fishing line is just one of the things that have more uses than its original purposes just like duct tape  and WD-40. If anyone has ever worked with it and tried to break it after hanging up a lure in the water can learn how strong it is, but it is so flexible.

My reading glasses became a little discombobulated as a result of my dog’s helicopter tail and my sister’s clumsiness. No, they didn’t break because I have the flexible frame, but the tiny screw that holds the lens in place was stripped out and lost. My husband found the tiny screw and made a quick fix. I didn’t need new ones and going to the store at the drop of a hat doesn’t happen out here in the middle of nowhere.

The glasses stayed fixed for a  while but then the little screw was then totally lost and the lens popped out again. The screw was never found and I would sort of set the lens back in but it would  pop out as soon as I looked down. So frustrating! I just needed something to put into the little holes to hold the little part together but finding something that small to hold it in place was not going to be easy.

First I thought of a small safety pin, but it wouldn’t hold the to halves tightly together. A bread tie? The wire part even with the plastic coating stripped off was not small  enough to go into the hole. We had no small caliber copper wire.  Duct tape would look tacky, so then I would like like a redneck Harry Potter even though the tape would be in a different part of the glasses. Sautering my damage the lenses, and welding is way to hot and would destroy the frame.

I then had the idea of fishing line. It was strong and flexible enough and it could fit into the small hole. Success! Yay! The green 12 lb line camouflaged real well with my green frame.

Fishing line can be used to tie just about anything and certain colors and types can be invisible to our eyes and it picks up where duct tape cannot go and outdoes string.

It is a redneck fix-it gadget all the same.

And don’t forget to buy the new boat battery if you go fishing!

Has anyone always thought it would be so cool to be invisible? You could spy on people, go where you want, do what you want, or take what you please and no one would know? Invisibility is an awesome power to dream of having. Being like the  Invisible Man or having a cloak of invisibility to pull out at will to sneak by would be so awesome. However, ...