How Could This Happen?

Somewhere on TV I saw/heard about an incident where someone thought they gave a young boy a baby Burmese python.  I don’t remember where, since my husband and I watch tons of nature and reptile wrangling shows. That baby Burm was actually a baby cottonmouth. The snake bit the young boy and sent him to the hospital where he nearly died. The person who gave the snake to the boy meant no harm.  How could someone make such a huge error!?

Burmese pythons are running wild in the SE US, and are an invasive species, and a baby could be tamed. No problem. These pythons have been introduced into the wild by negligence and by accident. Accidents are due to hurricanes destroying husbandry buildings and pet stores.

Anyway, how could this happen? How could someone make such a blunder? Burmese Pythons and cottonmouths are two totally different things.

Baby cottonmouths have a yellow tip on their tail just like a baby copperhead. Pythons do not. You can’t miss this. This yellow tip helps babies trick prey onto getting close enough for it to bite the prey with a fatal bite. Yes baby cottonmouths and other vipers come equipped with fully developed fangs and venom. The whole shebang. When a young viper bites you you get all the venom, not some! 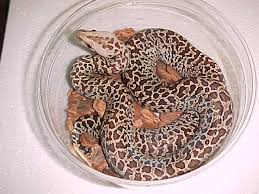 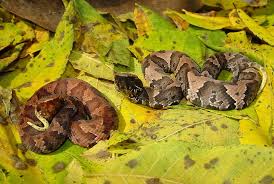 How are they different? Pythons and cottonmouths have different patterns.  They have different scale types. Pythons have small and many granular scales where cottonmouths have fewer larger, keeled scales. Pythons appear smooth and cottonmouths appear rough. Sometimes a cottonmouth will look slimy if they have been in the water. Pythons have pits on their lips rather than in between their eyes and nostrils. Pythons have many pits on their lips, where as pit vipers (including the cottonmouth) only have two and their location was just mentioned. Cottonmouths have a diamond shaped head; pythons have a wedge shaped head. Pythons are shiny where cottonmouths and other pit vipers are dull looking. To me, a cottonmouth’s head looks over-sized for its neck, and pythons do not. Of course for adults the size difference is obvious. Burmese pythons can get up to 12 feet and weigh in at 50+ pounds (sometimes even larger). Cottonmouths only get up to 6 ft and weigh about 10-15 pounds. This is what you need to know to observe from  a safe distance before doing anything. Difference in presence/absence of fangs and venom are too risky.

How are they similar? Both of them have elliptical (egg shaped) pupils. Both of them have thick, heavy bodies. Pythons are muscular whereas cottonmouths are fatty. Both have pits on their faces, but their location and number differ. Both can have bold colors, but other color morphs of the cottonmouth can be a solid color. Both of them can be found around and in water. That’s about it.

Some people would think it’s crazy to get near any snake. But, if you are daring enough to get close and catch it, then make sure you make proper ID, definitely if you plan on giving it to someone. A mistake can cost you or someone else’s life.

In my neck of the woods I don’t deal with Burmese pythons except in the pet stores, and I plan on having one one day. Cottonmouths, on the other hand, are indigenous to my state and region. I grew up with these baddies when I lived on the river. I had to look out for them and identify them before I learned how to identify a math problem.

Can you tell which is which? 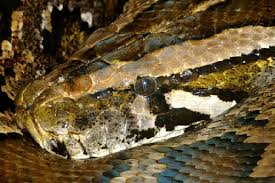 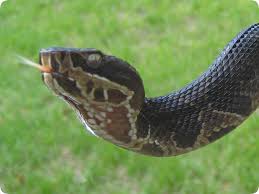 I have heard it said that the South and country folks have their own vocabulary that doesn't exist anywhere else. On TV shows that film country or backwood people there are captions to translate what people are saying. I can understand them just fine. It's really funny. Here are some common words and phrases that we use; some can be combine: Jeet ...