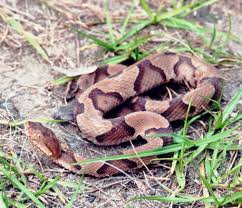 Last year during the spring and summer of 2011, we had the worst year of copperhead bites in history in the US Deep South. A lot of this had to do with the drought last year that dried up a lot of creeks and streams where wildlife would go to find water. The snakes and their prey were all looking for water.

Where did they all come?

Where humans are. We have almost limitless water supplies to our homes from our wells or from the city.

This had some to do with my adventure in “Copperhead in the Chicken Coop”. Someone else we know had been bitten by a copperhead doing maintenance around a building where he reached into a drainage pipe where a copperhead was hiding.

Anyway, this year already is starting off a lot like last year–dry and more snakes coming close to home. My husband and I have already seen more snakes around this year on roads and job sites. Not all of them have been copperheads, mind you.

One of my friends from school posted on Facebook that her husband had suffered from a copperhead bite. Not good.

Of any venomous snake bites, copperhead bites are not as life threatening as rattlesnake or cottonmouth bites, but they still need to be treated seriously. They are rarely fatal, but they can still cause infections, disfigurement, or other problems. Going to the doctor is still a good idea. Copperheads are more likely to give you a “dry bite”, but it’s always best to be safe than than sorry. 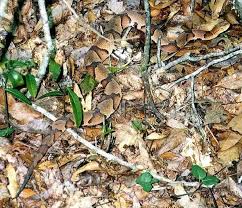 Can you spot the copperhead?

Most of the time, encounters with humans are by accident. If they aren’t in or underneath something, people step close or on them since they are so well camouflaged and stay very still. They don’t make any noise like a rattlesnake and they aren’t antagonistic like a cottonmouth is. They blend in very well in clay or dead leaves; this makes it possible for them to ambush their prey. It’s just we humans get caught in the crossfire.

Snakes don’t deliberately seek people out and attack them. They are more afraid you than you are of them. Some people would disagree with me on that one. Look at it this way. How would you feel if you encountered a giant something-or-other? That is how you appear to them. Would you attack to defend yourself? Until you prove the giant friendly, would you take chances?

I, for one, like snakes. Even venomous ones. They do have a purpose and place in nature. Venomous snakes require a care and respect when you encounter them. Most of the time you don’t see them unless you are looking for them or have things in the yard that will attract them or their prey…but for this year and last year I would say Mother Nature is throwing a curve-ball with all the droughts here lately!

I just hope that the drought brings in the rattlers too!

The Meanest Backwood Joke Ever

There is a joke that parents do to their kids when introducing them to the woods or when backwoods people bring their friends to the woods.  Luckily  no one gets hurt or the bejeezus scared out of them, but it is cruel to the person it happens to and a laugh to the pranksters. Once it happens to you you want to pass it on to someone else to ...