Year of the Tick 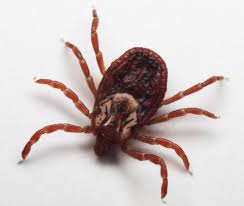 So sorry dear readers for my long absence from my blog. I had Rocky Mountain Spotted Fever…nah, just kidding–I’ve had author events, editing,  and getting books ready to publish.

I know that joke was mean and Rocky Mountain Spotted Fever is no laughing matter. My condolences for anyone who has ever had it or presently has it, but in all seriousness, there is a reason for the wise-crack.

Ticks. OMG those eight-legged, bloodsucking creations of the devil.

The SE of the US has had an unusually warm (and short) winter with no killing frost. So…we have had a very buggy year in general, but I could do without the ticks. And skeeters…UGH! (translation: skeeter is backwoods lingo for mosquito).

My poor husband and the dog have been nearly eaten alive by these buggers. All sizes, shapes, and colors. Luckily I haven’t seen any deer ticks on us, but knock on wood. These nasty black ticks carry Lyme disease.

After every backwood excursion hubby and the dog are pulling off the ticks. Sick! I’ve had a couple. After discovering them we five them a well deserved, fiery doom!

And seed ticks. These are basically baby ticks, and they attack you by swarms of the hundreds. Their bites itch much, much worse than chiggers (when I didn’t think anything sucked more than chigger bites).

When seed ticks bite you, you will itch so bad you scratch till you bleed and it still itches. You’ll have tiny red whelps on your ankles, legs, cracks of your legs, and other places you can’t see or don’t want people to know about.

Quite frankly I think the ticks have run off the fleas this year because I haven’t hardly seen any. Fleas suck too, but I don’t think they’re as bad as ticks are.

What’s that you say? Cities aren’t immune to their fair share of nasty pests. Roaches and subway rats.

Deet is your best friend when it comes to keeping them icky little buggers off of you, but it still doesn’t hurt to check anyway. Ick!

This year I hope we have some snow and stuff to vaporize these nasty little critters. I hope it gets them and those pesky mosquitoes. I think ticks and mosquitoes have tied for abundance and the most annoying pest award as far as I am concerned.

Crash Landing into Self Publishing: How The Newbie Author's Survival Guide Was Born

The title pretty much sums up how I entered into the publishing industry--namely self publishing. I tried to do my homework before entering, but no one I knew offered any help and I didn't have or knew how to find information like I do today. Most of the info I knew back then was about traditional publishing--old and outdated. Basically ...