My Love of Worldbuilding 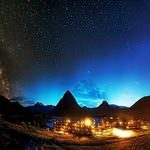 I have been world building ever since I can remember. I always thought it was fun and just enjoyed doing it. I could sit in the woods for hours constructing an imaginary world. It’s no wonder I seemed to gravitate toward fantasy and science fiction as an author, but I like thrillers and horror on the side 😉

I guesstimate my love of world building as far back as maybe age 4 or 5–or at least as long as I had learned how to play. I could touch or pick up something and it would instantly become a creature or something.

Being an only child and living away in the woods probably was a trigger since I didn’t really have other kids to play with very often. I would play with the neighbor’s son once in a while, but he was older than I was. We didn’t really do pretend stuff that often; we mostly played football, catch, skateboarded on their paved driveway, shot BB guns, and went in the woods.

In these worlds there were “people” (not everyone was human, creatures, magic, weaponry, language, etc. I would sit and draw a map of the our and the neighbors’ properties with landmarks and all and label what they were in the fictional worlds (yes plural). Sometimes I would pull these out for attack strategies with my warriors against our enemies who were planning to invade us. North may not have been true north, but who cares? It’s my world and my rules.  North is wherever I want it to be!

While going to school, I still did this for the same reason and to escape. School social life was awful for me most of the time since I was bullied  a lot. Since nobody wanted to be my friend, I created my own friends. Who cares if so-and-so is having a sleepover or a pool party and I’m not invited? I can go on an adventure anyway! My parents may take us to the river to swim, fish, or both, and it doesn’t matter that the bream nibble on my toes (it tickles), and we have to watch out for venomous water moccasins (cottonmouths)–it makes it an adventure! FYI the cottonmouths are real. Oh, you had to be careful around the rocks or step on a catfish which hurts. However I did pretend there were alligators and crocodiles and other fictional water monsters, lol. I can’t look for freshwater clams in a swimming pool. But, at times I did get lonely and wanted to share my adventures, but people didn’t seem to care or understand.

All of this was before I started writing novels. I wrote little short stories and poems now and then.

In high school, you know society forces you to grow up and “put away childish things”.  Well, I did, sort of. Through writing I was able to to start building characters and worlds once again. The adventures came rolling in. I challenged myself to see if I could write a book. I taught myself how since I didn’t have anyone to teach me. I used what I learned in language arts class and from books I had read.

My high school social life sucked royally–not my fault, and I didn’t  choose it or blame it on myself; it was chosen for me. Again, people didn’t accept or understand me and I was hardly invited or welcome in any hangouts or groups.

While everyone was at the prom, I was writing about the next great adventure. This and Nintendo was my crack. I was so ready to get my homework done and make my mom get off the computer from playing solitaire so I could write! Since I didn’t have a sister until I was 18, she was the next closest thing. I didn’t have to make my dad get off since he didn’t know how to work it ;).

I also began my art portfolio where I would draw the characters and color them with colored pencils and crayons. I would get the sets with the every color imaginable. I used fine tipped lead pencils (.5 or .7 mm), sketch pads, tracing paper. Sometimes I had stuff on the backs of old worksheets or notebook paper before I started using allowance money to buy art stuff. I have folders and notebooks full of characters and maps and I still have much more to draw!

Being a night owl and the computer being their room meant that I kept them awake during the summer into the wee hours. They had to beg me to go to bed. “Let me finish this thought” would turn into another hour. Sooner or later I finally had to go to bed. Sometimes the dinner bell would come at the most inopportune time. Imagine this:

Me: “Aww man! Right in the middle of a the best part!”

Mom: “You can finish it after dinner! You need to eat! You’ve been on that computer for two hours now!”

Sometimes homework would get in the way. That sucked more than anything. I felt the same way when I had homework in every subject in elementary school, and I couldn’t go in the woods  since it wouldn’t fit in before supper, bath, and bedtime :(.

Sometime during and after high school, a younger cousin took an interest in my world building and she started to do it with me. We did this for years and she would beg me to come over so we could spend hours making stories and acting them out. When she became a boy-crazy teenager that all ended, but not with me. It lived on…

When all this began as a child and as a teen, I never dreamed I would be a professional writer, ever. Quite frankly I wasn’t sure exactly what I really wanted to be. I got talked into publishing and sharing with others. It stayed hidden for a long time. No one at school knew I was writing. If they thought I was stupid, ugly, and weird, would they care I was writing a book or three? Nope. If I did say anything, they would have just made fun of me. They made fun of anything I ever did no matter how small or “normal” it seemed. It seemed like whenever I did it something was weird about it.

Later I had discovered that I really had talent–from others, not my own assessment–since my self image and self esteem was pretty abysmal due to all the years of bullying since preschool.

I am still doing this to this day. Being back in the backwoods fuels my creative thinking. When I need to take a day I go for a walk or go to a favorite quiet place and think. It’s still the same as it was when I was a kid but the worlds, characters, and adventures have only become grander and more elaborate as time has gone on. The woods, dreams, video games, and some books offer some inspiration  but sometimes things hit me like a bolt of lightning. I write it in my notebook or sometimes it stays in my head since I seem to have a memory like an elephant (not photographic). If it’s  ultra cool I won’t forget it, but if it’s something that may not stay in, I’ll write it down.

There are about 40,000 different spider species around the world, making it impossible to identify any spider you come in contact with at a glance to know if it dangerous or deadly. Fortunately, if you live in North America, there are really only two spiders that you need to know about that can cause a real threat: The Black Widow and the Brown Recluse. These ...