There are about 40,000 different spider species around the world, making it impossible to identify any spider you come in contact with at a glance to know if it dangerous or deadly. Fortunately, if you live in North America, there are really only two spiders that you need to know about that can cause a real threat: The Black Widow and the Brown Recluse.

These two spiders are relatively easy to identify due to their distinctive markings and characteristics. Here’s what you need to know: 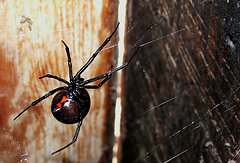 The Black Widow is perhaps the easiest of the two to spot: It is a black spider with a distinctive red hourglass pattern on the abdomen (underside of the spider). However, variations can range from yellowish orange to red, and from the hourglass shape to little more than a dot.

The body of the Black Widow can reach 1/2 inch in length. The body is often shiny and bulbous, making them easy to identify.

Black Widow spiders can be found anywhere in the United States. They like to hang out in dark, low-lying areas such as wood piles, rocks, and stumps. However, you’re also likely to find them in garages, sheds, basements, and closets. It’s always a good idea to look in your shoe before you put your foot inside. 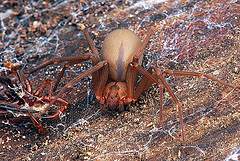 The Brown Recluse is a bit harder to properly identify because it shares features that are common to many other spiders. Like its name suggests, it is a brown spider. Its coloring is typically muted, and it has a red underbelly. The distinguishing characteristic of a Brown Recluse is the violin- or fiddle-shaped marking on its front body (the part where the legs are attached). The neck of the violin points toward the body.

The body of a Brown Recluse can be 1/4 to 3/4 inch. Another distinguishing characteristic is that it only has six eyes instead of the classic eight — though you are unlikely to get close enough to a Brown Recluse to be able to notice this.

There are certainly other poisonous spiders in the world, but the Black Widow and the Brown Recluse are the two that are most problematic in the United States. If you think you have been bit by one of these spiders, it is important to seek medical care immediately. Bring the spider (or a portion of it) if you can for identification. However, don’t make things worse by further provoking the spider and encouraging it to bite you again.

Sarah Rexman is the main researcher and writer for bedbugs.org. Her most recent accomplishment includes graduating from Florida State, with a degree in environmental science.  Her current focus for the site involves researching online resources.

The Longest and Worst Night Ever

I've recently come home from a 3 week camping trip. That's right three weeks straight. It was awesome fun and great to get further away from civilization. I still popped in now and then on Twitter and Facebook since my  workstation is very portable. There were four days where I had zero signal though--we camped out on a national wildlife refuge ...