Make Mine an Orangeberry Remix: Darkness 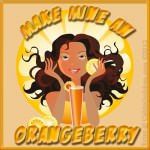 I was most pleased to be able to participate in the Make Mine an Orangeberry and Orangeberry Trick or Treat tour! The awesome bacon-philic Cabin Goddess invited me to the cabin located in Alaska, one of the states I would love to visit one day, to share an interview and a couple recipes with her and so I am sharing it on this blog with an extra special treat–my flash fiction piece on Darkness–rather it’s not really fiction–it’s nonfiction with mind-bending theoretical astronomy. astrophysics, and dark matter–one of the many scientific ideas and concepts that fascinate me. Get prepared for me to get my science-geek on!

Click below to go visit the cabin and stay awhile and have some bacon and check out some of the other cool posts!

Make Mine An Orangeberry Interview: Represent! Getting Dirty With Amanda Taylor

No to enjoy my piece on darkness! 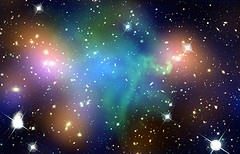 Has anyone asked the question, “What is darkness?” Has anyone wondered what it’s made out of or what’s in it? I’m sure you have and scientists are trying to solve the riddle right now. It’s beginning to be more complicated and harder to do than they dreamed.

Darkness is everywhere from the far reaches and within the universe to the atomic level.

Darkness comes when light leaves. It envelopes us and it behaves similarly to light, but yet it doesn’t. We can walk through it just like light. It’s a curious thing. It affects our moods, our fears, and our imaginations. Things seem to live and lurk within it. We have never really understood it even though it has been with us ever since man has existed and perhaps before.

Is the interstellar space really empty? We used to think the air around us was! Physicists and astrophysicists and astronomers hardly think so—hence the concepts of dark matter and dark energy. Dark matter and energy doesn’t behave the same way as other matter and energy we know so much about. It plays by its own rules. It exerts its presence so we know it’s there, but it seems nearly impossible to study. Or does it?

How do we know dark matter is there? One example, anything you see on Earth that is black absorbs all light. That’s what makes black. It’s a similar kind of thing for dark matter, but it absorbs all energy. We can’t bounce things off of it or it doesn’t reflect light like we can a planet to know it’s there. So far its visible presence known to us is by exerting gravity on things that we can see. Our eyes and brains are programmed to seen and interpret light. Without light we can’t see or understand dark, so hence to the complex problem.

The best example of dark matter is a black hole. It has so much gravity that it can trap visible light. Is it a “hole”? All we can see is this black thing surrounded by stars and galaxies in a particular shape. We can’t send anything to it for a reading because it traps everything, and to make matters worse there has to be other kinds of dark matter. We are trying to study something we can’t see except that it exerts its force to shape the universe or so we think.

There is this thought. Does dark and light matter coexist everywhere, or is darkness a form of antimatter like light is? What if there is dark energy like there is light energy and nothing more? We know that light is electromagnetic radiation, but what is darkness? We know it’s not electromagnetic radiation—it has to be made of something else. It has to be something that takes instead of gives.

What if the whole concept of dark matter is slightly wrong? What if matter is simply matter and light and dark are just antimatter? For instance, when you turn off the light that big black blob is still a couch regardless if light is reflecting off of it or not. We know it’s a couch because we have seen it and understand it. If the couch is black even with the light on it’s still a couch even if the carpet, wall, and table are not. Even if you painted the whole room, black it’s still a couch. If you painted the room black and turned off the light, it is still a couch. If you painted everything including the couch and turned off the light, it’s—you got it—a couch. It doesn’t change. Kick it and it still hurts your toe—it’s still there and didn’t go anywhere even though you can’t see it. It still weighs the same. Touch it and it feels the same even though you can’t see it. It’s has the same make-up. We know it’s a couch because we are familiar with it. Some of those dark bodies out there are a form of matter that we are unfamiliar with and we can’t see or study them because they have unique physical properties like extreme gravity or doesn’t emit any forms of radiation. All matter has gravity no matter how small. If we took that same couch, painted it black, and let it float in interstellar space, it will exert gravity on anything around it and signs will be visible—it will attract light, and since it’s black, it won’t reflect light—it absorbs it. A vacuum such as space produces its own unique environment as opposed to the surface of the earth. Is it now “dark matter” if we can’t see it because it’s black, and no one knows that you put a black couch in interstellar space for a prank?

Also let’s take our black hole. If we take all the stars and lights from around it, it would be the same. It has the same properties including extreme gravity. That’s just makes it different, and it would be surprising if the black hole is made up of the same building blocks we all know about, but just subject to extreme conditions and unique properties.

Just us not being able to identify or understand what these forms of matter are reminds me of the warrior handing his fair maiden a Wii remote and she asks “Seriously, what is it?” is basically where we are on the subject of darkness and all the things in it!

Last Monday I wasn't in the blogosphere since I was at the doctor's office with hubby as he is going through a gauntlet with kidney stones. So it's not me thankfully, but I wouldn't want to  wish this upon anyone. While sitting in the doctor's office, I was musing about how long I have lived with loved ones suffering from these things as I sat ...