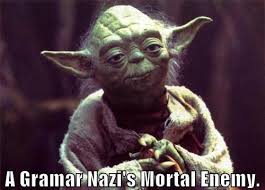 And so it is with us from the backwoods!

We people from the backwoods seem to have our own grammar rules, and it drives the grammar police (or AKA grammar Nazis)  up the wall. When we speak, it’s like nails on a chalkboard to said members of the population. We have to go to school to be educated to learn things the “right” way, or rather, the way the rest of the world does things. Once being educated, we quickly learn about how many grammar rules we break each day out here, and it’s usually all of them on a daily basis.

So I will take a post today to learn about how grammar works in the backwoods much to the laughs of some or the irritation of others.

I think that about covers it. If I missed one just leave a comment. Now you can probably communicate with a backwoods person and/or annoy a grammar Nazi near you!

#FourthWallFriday with the Cabin Goddess

Today I was able to participate with Kriss the Cabin Goddess and her Fourth Wall Friday! It's a great activity for authors and their characters to think outside the box. My day at Rock Hawk effigy and park takes a series of turns when my world and Neiko's world collide. No further adieu, stop by enjoy and eat some bacon! The Narrow Escape of ...