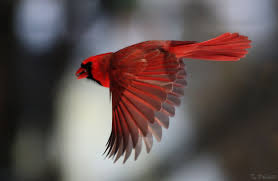 For the past month or so I have a male cardinal that likes to visit everyday, multiple times a day to do nothing more than run into the windows of the house and surrounding buildings.

This cardinal seems to have a major window fetish or something. This guy or his relative did the same thing last year about the same time.

The crazy bird doesn’t just run into the window once. He does it repeatedly. This makes it difficult to do things like, you know, sleep or write.

When the whole thing started back in the end of February or the beginning of March it all started with the bedroom window. I would be awakened with the loud bang and tap of his beak against the glass–or ram it rather. I’m surprised the windows haven’t broken yet. They’re not those strong storm windows.

Hubby and I come up with the idea of putting a huge rubber python in the fig tree to maybe deter the bird. Well, mission sort of accomplished. He left the bedroom window alone, but he decided to hit all the other windows in the house. *headdesk* I guess we need more rubber snakes for every tree around the house and every window.

Why the name Kamikaze? Well, the way he dives and flies at the windows from the tree looks like the same finesse as the kamikaze pilots used when they plowed into the sides of battleships. His beak makes contact with the window like the prop of the plane. However the cardinal does it more than once. I’ve watched enough documentaries and war movies with my dad to know, lol.

I still haven’t figured out why he does it. Is it his reflection? Does he want in? Why does he keep doing it? Has he not figured out that he can’t fly through or the bird he sees isn’t real? Secondly, why does he do it to more than one building? I’ve seen this sitting outside to enjoy the spring weather.

Guest Post: Ways to Increase Social Engagement with Your Customers

Today I would like to welcome back Diana Maria to the backwoods! Today she will be sharing with us the importance and ways of increasing social media engagement. These ideas are important for authors in today's publishing world. Our customers are our readers and they want to interact with us--their entertainment. Enjoy! Establishing a customer ...