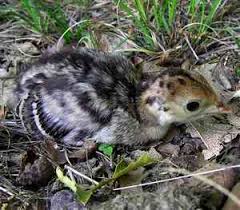 I couldn’t help but to take today to write about the adorable new additions to the Taylor family today. Well I can’t name them yet since I don’t know if they are male or female. I haven’t learned their personalities yet, and sometimes naming something a unisex name can be droll at times.

As of early Friday morning, we hatched out 2 baby turkeys from an egg. We have the incubator and the egg rotator and all that fun stuff for raising baby poultry birds such as chickens, turkeys, etc. The third egg didn’t hatch, so we just have 2.

These eggs were orphaned in the wild since the mother decided nest in a field that was inevitably going to be bushhogged–it’s on a farm. Anyway my husband was on the tractor and saw the hen turkey fly away, and not too long after that he found the nest. The mother hen would undoubtedly abandon the nest after that big green monster (a John Deere) had just passed through. Toms aka gobblers don’t have anything to do with the nest, so it’s all up to the mother hen.

So being the animal lovers that we are, hubby brought home the orphaned unhatched eggs and put them into the incubator.

Will we release them back into the wild? Hard to say since the very first thing they saw was a human and they will be seeing humans for the greater part of their lives. Also they will be fed by humans, so they won’t be afraid of humans which can be bad. There isn’t a whole lot of a difference between farm hatched turkeys and wild turkeys appearance-wise  Turning them out would be just as cruel as throwing them out on the highway somewhere, especially since wild turkey hens care for their young a long time. They are actually social animals that travel in groups and communicate with one another.

These little guys are just adorable I must say. They peep like baby chicks and they learned to walk in such a short time. They are only about 3 days old at the time of this writing and they are already coming to me even though I haven’t really interacted with them very much. By doing research I found out they call baby turkeys poults. Funny that we humans have to come up with creative names for baby animals or even male and female animals. Keeping it all straight can be hairy at times.

The Keys to a Tomboy's Heart: Tips for Guys Who Love Tomboys

Today's post actually is a result of Google searches that has led to another one of my posts: Valentines for a Tomboy Part II. I'm not sure of anyone read Part I but I digress... Anyway, there have been a few guys here and their ask the omnipotent being we all know as Google on how to treat or get a tomboy something special on special days like anniversaries ...