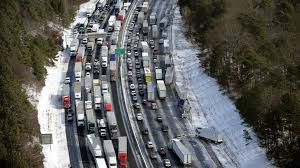 Entering into Snowmegeddon 2014, in some ways this reminds me of a blend of Snowmegeddon 2011 and the great winter storm of ’93–but without the blizzard–due to its sheer size, cold temperatures, and the problems. My gosh the problems… From accidents, death, and rumors of government conspiracy. Well, I guess the bright side was people did help one another, and there wasn’t any shootings or violence known to have occured.

The news people have already talked about the problems that occurred in Atlanta and the rest of the Southeast. Of course, most of the problems took place in the cities. Makes me so glad that I don’t live in the city.

I moved out of the suburbs going on 4 years ago now. I hated the traffic on a good day. One little mishap like a fatality wreck and the traffic clogs for 30 square miles. When I worked at the lab, everyone was late to work one day because of a fatality wreck on the interstate. It gets bad when it rains, but throw something like this in, and there’s problems!

As you get further out into the boonies where I live, there are even fewer resources to clear the roads of ice. Pretty much when the roads ice over you aren’t going anywhere. Sometimes fallen trees add to the mess, but not this go around though!

Since I am presently working from home, I didn’t have to venture out or call in to anyone and get cussed out by the boss. My husband took a status check the next morning and risk the 70+ mile trek to work, so he stayed home. We had the day to ourselves to do whatever we wanted.

We went for what I call a “snow hike”, what is one of my favorite pastimes. It’s pristine to walk in the woods after a freshly fallen snow. The quiet, the beauty, and the paradox. How everything changes and yet remains the same.

Our Belgian malinois, Shadow, loves the snow. We took him with us on the hike. He would run and play as well as eat the snow. The snakes and our red-footed tortoise were too busy sleeping. That’s herps for you!

The rabbits, foxes, and coyotes had been out and about the night before. They left tracks everywhere for us to find. The squirrels and the deer said “Screw it” and stayed in their “beds”. The birds came out to play later on in the day.

I also asked my husband’s grandmother to teach me how to make snow ice cream. That’s yummy and so simple and fun. The snow melted before we had a chance to make snow cones, but hey, maybe next time, right? If anyone is wondering, it’s just like homemade ice cream, but so much quicker to make.

Out  in the middle of nowhere things slow down a lot. We don’t freak out or get in a big hurry, unless it’s to get those last-minute things from the grocery store before the snow hits.

Today's post is based on actual events, but the person, the name of his company (if it is even real, but who knows?), and his home country will remain anonymous. If you are just itching to know, PM, DM, or contact me privately. The purpose of this post is not to slander, but to inform and educate since not everyone is who they say they are! Here goes! Early ...