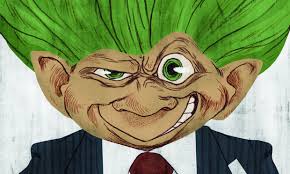 I am an author by nature, but fantasy will always be my first love even if I am getting into supernatural, mysteries, and thrillers. I am a genre crosser and genre hopper in reading as well as writing. What can I say?

In being a fantasy reader, author, gamer, and movie lover, I have seen my fair share of trolls in regards to the mythical ugly, disgusting creatures that wreak havoc in any world anywhere. I have seen them meet their ends the blades and weapons of other races after they have had enough. I love killing trolls in video games.

In the Neiko saga, Neiko doesn’t kill trolls, so I don’t really write about them, but they could arrive on the scene possibly should someone feel like making them. Or they may appear in another fantasy book.

All the fantasy fun aside. We all know there are trolls in the real world. They may look human but underneath they are the ugly, wart and mucus covered, hook-nosed, club slinging beings they are. They exist on the Internet and this is when they show their true makeup instead of the human covering they wear until they get online. Today I am going to talk more about a more lethal species of internet troll genus: the copyright troll.

Intro to the Copyright Troll Species 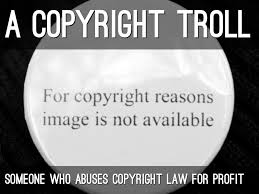 This picture is an adequate description of what it is they do. Unlike your normal, every day, run-of-the-mill internet troll who starts flame wars on public forums, social media, blogs, etc who make no money for the trouble they cause, copyright trolls do. They make lots of money by abusing copyright law and using legal methods of the flame war and hard-sell boiler room techniques to extract information and pressuring people to pay some kind of a settlement demand on an alleged copyright infringement. It may or may not exist altogether, but it’s up to you to prove it to the hypothetical judge in the event that it should hypothetically go to court. Chances are good that it won’t, but be prepared in case.

To make matters worse, there are entire colonies of these creatures. Sometimes even very large empires. They target regular people, bloggers, business owners, and others. They use very scary tactics and threaten to hit you in the head with those clubs that could be dubbed “statutory damages” and “litigation”. They are very good at what they do. They pillage the marketplace and make it unsafe for everyone to use any intellectual property albeit legitimately. Doesn’t matter as they keep hearing “ca-ching!”

They are masters at setting snares and deadfalls for people. They are adept at using the Internet to propagate their plan for world domination. They have pretty much taken over the civilized world. There is no way to tell what is safe and what isn’t. That is the whole idea, isn’t it? Doesn’t matter who gets hurt as long as they get their gold. The creators and the users–doesn’t matter. Heck, they even take money from the creators as well in ambiguous contractual language (seen something on ELI forums about this and reminds me how Author Solutions companies ensnare authors) and inflated incidences of infringement due to their own campaigns (racketeering anyone?). Everyone is expendable as far as they are concerned. As long as no one knows or says anything, then life is good right?

These creatures have become an epidemic. They are worse than Ebola, Herpes, AIDS, or Hepatitis C. They can find you wherever you live and make your life hell. They have a hidden cache of spells, but people have been able to discover how they work and ward them off. I’m learning some of that now. I’m sure they are bad enough to run Satan out of hell and cause him to find another home elsewhere.

This breed of troll has a a nice colorful collection of subspecies. It’s actually quite interesting and amazing should anyone care to study them further. They can interbreed and work together to make more lethal combination. Here they are in no particular order:

Trademark Troll   Trademarks Kingdom
Patent Troll Patent Kingdom
Porn Troll Pornography Kingdom (movies, online magazines, photos)Photo Troll Photography, Stock Photography, and Stock Footage Kingdom
Movie Troll Movie Kingdom
Music Troll Music Tunes and Lyrics Kingdom
Fabric Troll Fabric Patterns Kingdom
Text Troll Any form of Writing Kingdom
Attorney Troll Attorneys, paralegals, legal assistants. Usually nomadic going from kingdom to kingdom. They are the ultimate driving force of the battle and plunder
Licensing Troll Usually the smaller footmen that live in the larger sections of the different kingdoms. Stationary and not nomadic. They are not as versed in the laws of the kingdoms as the Attorney Trolls are and not scholars in those arts. Usually call themselves “licensing specialists” or “license compliance specialists.”

The War Still Rages On

Some of these kingdoms (music, movie, and porn) of copyright trolls have suffered some bitter defeats while others still plunder cyberspace relentlessly, almost unhindered. The ones leading the pack are the Photo and Text Trolls who also have the larger armies of Licensing and Attorney Trolls. They have learned well from the mistakes of other kingdoms. The Photo Trolls lead the pack with much spoil and plunder. Not too many people are doing anything about it. They are keeping it quiet and that aids in their success. Bullying and Abuse 101: as long as the victims keep quiet and scared silent we can keep abusing and bullying them.

Some people like me have picked up my sword and said enough is enough after two of these creatures have come to my virtual home and pounded their big green, snot-covered fists on my door demanding money I don’t owe. They have even sent their stinky, grunge-covered letters to my home just to piss me off some more. I have done a lot of homework and sought some legal advice and know I have done nothing wrong. I am a writer with a blog and will do my due diligence and my part to warn others about this nonsense. I am also reporting it as one of these pointy-eared thugs may be guilty of worse things than extortion. I hope he drops his clubs on both of his feet and hobbles home.

As always don’t feed the trolls. In this sense this would mean definitely don’t pay them no matter how much they threaten, curse, slobber, and swing those clubs at you. Objectively and carefully survey the situation. Don’t talk to them on the phone or by email. You may need to respond once by snail mail and that be it. Don’t prove your case to them as they will change their story and come after you again and then may be able to pursue litigation. Hold your hand close to your chest if you have something to knock them off the bridge. You should put that in your complaint and if you should consult an attorney. Carefully plan your strategy. Reach out to others who have gone before you. You may have a fighting chance. You don’t have to take it to court to win your battle unless you have the stomach, patience, and monetary resources.

Please, do not feed the trolls! (Photo credit: Wikipedia)

In celebration for World Literacy Day, I am participating in support of world literacy. Permission and credit by Grammarly. ...