Bloody Klondike Gold: Short Story Intro to the Randi Braveheart Mysteries and the Story Behind the Story 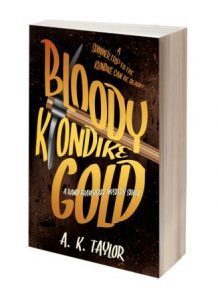 Today, Sept 19 2016, is release day for Bloody Klondike Gold a short story intro to the Randi Braveheart Mystery Series–a new series for older kids, tweens, teens, and younger YA audiences. The story actually takes place after the first full length book To Catch a Catfish planned to be released in 2017 and the second book which I am not sure will come next. So this is like book 1.5 if you will, but there is some backstory added in at the beginning to tie the two together.

This series will be quite a bit like the Nancy Drew and the Hardy Boys and the movie the River Rat, but with a tomboy heroine that comes from a small community in the bayous of lake Pontchartrain in Louisiana. I write about tomboys since I am a tomboy. She is hardcore like me. She and her father move to San Francisco , but between Randi and her newfound prowess and her father’s profession of being an expert miner, readers expect to end up with mystery and adventure in some very remote and colorful locales–the Klondike in SE Alaska (also in NW Canada) is no exception. Other proposed locations would be in the American Southwest, the wilderness of Canada, the Everglades, the Okefenokee Swamp, Lake Okeechobee, the mountains, and some places in her home town and on the lake.

Personally, I did not grow up in the bayous, but I do have a fascination with them, but I did grow up on the river in the backwoods of NE Georgia. I have been around small swamps that pop up here and there in Georgia. I visited the Okefenokee swamp as a kid, so I can relate to Randi and her country life and make it real to readers.

There was a certain collective I used to be in (it no longer exists) that started doing anthologies, so I tried one or two. One that seemed to pique my interest was a thriller anthology and some of the specs for the short stories going in was it needed to have a strong female lead and plenty of action and bullets. I could do this. This sounds like something I could do–I would try something more “real world” as opposed to the fantasy I normally wrote in. I already had come up with the title “Bloody Klondike Gold”, so I wrote the first version of it.

To make a long story short, despite my best efforts, it did not make the anthology. There were some fishy politics and such going around and a particular author had more than one of her stories than anybody else put in since she was a thriller author and because of her high status in that collective. There were others who didn’t make the cut either, but the favoritism was unfair to them too, but they/we were simply SOL.

So, I had this short story that I felt had an audience, but I didn’t know what to do with it. So, it stayed on my hard drive for 4 years.

I did try the previous version ReadWave to try out the site and to see would would happen with this story for kicks. Actually, I did receive a good bit of good reader feedback, so I was able to test it with real readers. Score. Well, Readwave eventually went defunct. So Bloody Klondike Gold left the online world again.

Then I was directed to some great material and advice about using short stories and selling them even if they are somewhat stand alone as permafrees or 99 cent short reads that can be offered as freebies on free days and offering it to new newsletter subscribers and whatnot.

During the time I was taking this in, the series came into focus. Creative names flew across my mind and they all had a theme ringing to it. Book #1 almost was a stand alone thriller, but it became part of the Randi Braveheart mysteries as well since it coincided with the theme of the series. Its plot is centered around “what if” and a real issue that took place in my life.

So, I went back and added some more meat to the bones so that it could follow the course of the series and be like book 1.5.

Interested in checking it out? You can hover over the books tab at the top and go under “Randi Braveheart Mysteries” to read and excerpt or purchase or use the links below to read a sample and/or buy.

Behind the Scenes: Exploring Some of the Backstory to Escape from Ancient Egypt

Today's post is going go into the backstory that led to some of the explosive events that took place in the second book of the Neiko Adventure Saga Escape from Ancient Egypt as well as a teaser to some of the events in Book #3 Black Hand Vacation  that is one of the subplots. Some of this backstory. An Encounter 11 Years in the Making There ...