The Story Behind the Neiko Saga Part 2: Exploring the Dark Side 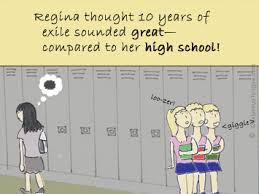 My 30 years of social exile and counting.

Like I said in the last post, the story has a dark side. I did hit some of the highlights about why I started writing at such a young age, both good and bad. Some of the technical terms I will use in this post were unknown to me at the times I experienced, them and I have only learned them in recent years.

I am still working through all the garbage it has left behind, and I will  talk about them later on in a different series. There is one issue I am still trying to fight free of: ostracism. There will be metaphorical posts about it coming up.

I have always been a shy, quiet and reserved person. I am a loner by nature, but even loners need access to positive human interaction and to supportive people. But what happens when all you seem to attract are toxic, abusive, and negative people who go out of their way to make your life a living hell, and there are no positive, supportive people within reach? After they have spewed their verbal diarrhea all over you, then they go to great lengths to make sure you are shut out, then what?

Welcome to my personal hell of bullying, ostracism, and complex trauma (read this article about my struggle with CTSD and CPTSD) that has led to even more harm: OCD (obsessive compulsive disorder), GAD (generalized anxiety disorder), anthropophobia (fear of people and interpersonal relationships), agoraphobia, avoidant-borderline personality disorder, and very severe social anxiety disorder/social phobia. Both bullying and ostracism have co-caused this alphabet soup from hell, but ostracism is the leading cause, since has been around longer and is considerably worse than bullying: negative attention is better than no attention at all.

My home life has been awesome for the most part. When I leave it is when all hell breaks loose. It seems like I have a target on my back 24/7. Do I have an invisible neon sign over my head that reads: Ostracize Me?

Ever since preschool at the age of 5, I have been constantly bullied, ostracized, and emotionally and psychologically abused. Bullying died down to almost negligent after 20 years, except for the occasional asshole who wants to take a potshot at me. Ostracism has remained a constant curse over my head for 30 years and counting. Read this article about the 3 stages of ostracism and this interview with a leading expert on the subject.

I am at Stage 3/Chronic Level (where ostracism lasts for month or years vs. a one second to one week). I have been chronic ever since I was a CHILD. But guess what? Ostracism is chosen for a person by everyone else and the social hierarchy. They don’t have to do anything to be ostracized. Existing can be enough. Chronic ostracism leads to abandonment and neglect, and most people know that causes major emotional, interpersonal, and psychological problems. Even physical ones. The article even mentions ostracism can last a lifetime unless it ceases or successful intervention is made. Who know what that means. When nobody has given a damn in 30 years, and they still don’t today, intervention at all is a pipe dream. I have been sentenced to solitary existence for life it seems by society and the world. I have never been free to be myself. I have never belonged anywhere. I have been left to die in my own private hole either literally or figuratively speaking. The world doesn’t really give a crap and has damned me to my own private hell.

Bullying or ostracism separately are harmful in themselves at even the mild level for a brief amount of time. When you combine them at the chronic level over decades, then you have entered my life. When I was at home, except when we lived in the suburbs, I was safe. Everything in the suburbs was at an all time high, and there was no real escape from my miserable existence until I found writing.

Readers and my editor remark about the strength Neiko has as a character. Not only did she exhibit the strength that most Native American women have as a whole, she was created from the strength I had to amass to make it through the day. There were no brave adventures, fighting bad guys, traveling through time or other universes or dimensions: I was using all my strength just to make it through the day. Compared to Neiko, my life was such a bore and sucked to the fullest. When I made her, I gave her a lot of my strengths and weaknesses in addition to her Native abilities. When it comes to nature and the environment, I am not really afraid of anything, even venomous snakes and spiders, alligators/crocodiles, and grizzly bears. She is shy like I am when meeting new people, but she doesn’t take any crap from people. I haven’t either, but standing up for myself doesn’t fix the problem. I am not creeped out by old tombs or graveyards. Neiko knows that fear won’t get her out of anything. When facing an immortal evil, it will push her to her limit. Same with me, except I don’t feel comfortable in my own skin in public in a crowd.

I also make Neiko loved by her tribal and new friends as much I have been hated. Not only do Neiko’s friends show signs of Native brotherhood, it is also a wish of what I wanted in my own life. Neiko and her friends would even give their lives for each other. In real life for me, no one would be caught dead with me in their group or with me out in public where Joe Popular or Jane Snottynose may be. Elitist snobs from all walks of life take a dump on me and look down their nose at me at every turn. Neiko deals with the snobs too. I am judged before I even have a chance to do anything. Said elitists have the power to turn anyone against me, who may have started to take an interest in me, even if it’s a lie. I have no recourse. I am constantly judged on what I have and not what I can do. Since I have grown up poor, then I am not worth anything, even if I can do anything extraordinary. If I want to learn how to do anything, I have to learn it myself because no one thinks I am worth their time, and it doesn’t matter if I reach out or not. I spared Neiko the sorrow of not having a mentor or someone take time with her.

People have critiqued me in that what some people do to get Neiko to concede their demands and how it crosses a line. For one thing, it was frequently done in the time period in question and how slaves were treated anywhere in the ancient world. Some have questioned the “love” aspect. I have seen worse in the modern day. Thirdly, as far as the “abuse” in question, I have undergone much, much worse emotional abuse for stupider things. If I wrote what I had been through in a teen book in any shape or form, it would banned or there would be a lot of parental complaints.

I also wrote for fun and to have fun, because the rest of my life was dark and dreary and lonely. Even as an adult author, and bullying has pretty much died off, ostracism is alive and well and still stunts my life and robs me of a quality life. I have been trying everything in my power to stop or change it, but so far it has all been in vain.

I haven’t figured out why people hate me so much. I’ve never figured out why. I try to treat others how I want to be treated (with kindness and respect), show myself friendly to the best of my ability. I don’t know where the so-named positive, supportive people are. All I seem to have access to and attract are toxic, negative people. Moving doesn’t help, because I have moved 4 times in my entire life with family and husband, but it’s the same problem with different faces. It follows me everywhere like a curse. I grow and change as a person, but I am still ignored and frozen out. If anyone even notices me at all, they look down their nose at me.

Nothing I ever do is ever good enough. I have been told that my hopes and dreams, talents and abilities, and I don’t matter or are worthless. My life is meaningless. I have been chosen for exclusion and my fundamental needs as a human being have been pushed away from me. I have been issued the social death penalty. On what charge I have no idea. I am on trial everywhere I go, and I have to prove myself. For what? Even if I do, it’s never good enough. I have no identity to the world. I know who I am, but no one else does or cares, and they never have. Even if they do for just a second, it never lasts no matter how hard I try.

I know that what I have gone through/going through results in either suicide or violent outbursts. It’s a miracle neither have happened. I have given up on the good will of humanity or humanity as a whole. I have been permanently disconnected from the human race with no way back. Sometimes I wonder if I even have a purpose or my life has or will ever have meaning. I wonder if I will ever achieve or accomplish anything. I wonder if I will ever make a difference. From where I am standing, it looks extremely difficult at best and impossible at the worst.

The Story Behind the Neiko Saga Part 3: The Big Leak

Time passes as I go through school with my secret writing projects. I fill notebooks and folders with maps, character sketches, and notes for this new series. I am still making stories with my cousin. Several books are written around homework, band practice, and family life. After I graduate from high school, I go on to work. I decide to take ...